You are here: Home / Archives for progress 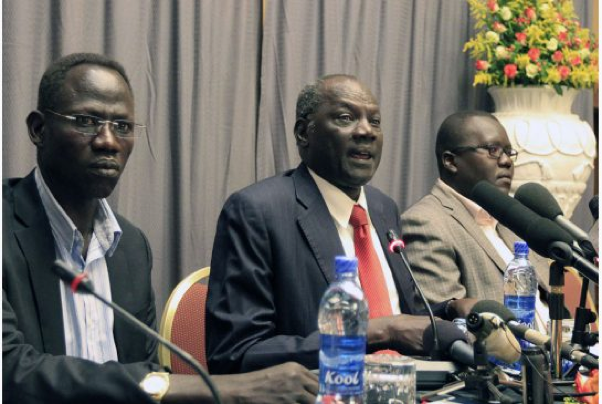 South Sudan gained independence on 9th July 2011 after decades of armed struggle with the Sudanese government. On 15th December 2013, fighting that began as a political dispute between President Salva Kiir and his former deputy, Riek Machar broke out and turned into ethnic violence. On 23rd January, 2014, a ceasefire agreement was reached after three weeks of talks in Ethiopia. Just a month after signing the cease-fire, fighting resumed in the major towns of Malakal and Bentiu. Within the 4 months of conflict, several people are believed to have been killed; over 870,000 others have fled their homes, 145,000 of them to neighbouring countries and 75,000 to UN Mission bases in South Sudan. Peace talks hosted by Ethiopia with support from Intergovernmental Authority on Development (IGAD), are staggeringly going on with periods of recess.

Peace talks are interactions expected to respond to conflicts. The response demands for mutual bilateral bargains to reach an amicable agreement between the warring parties and restore normality in the conflict zone and its neighbours. The loud call for peace talks by various conflicting factions, regional bodies, the international community and people of good will stems from the principle of the ‘responsibility to protect’ civilians from unnecessary harm.

When parties agree to build a consensus for peace talks, the venue is an important factor that will determine the outcome of a negotiation. Venue determines who participates and who does not. When citizens attend to the affairs of their country, they get their concerns included in the agenda of the negotiations, and influence public support for them. It allows them to closely monitor the implementation of the outcomes and commit to long-term peace process.

Apart from South Africa, Kenya and a handful of other African countries that have hosted their own peace talks, the majority have held these in a foreign country. Some agreements reached during these periods have been adhered to, several others have not. Well aware that foreign states offer neutral, quiet and peaceful grounds for peace talks, there is a complete disconnect with what happens on the ground. It limits participation of other stakeholders who have a say in the matter. It further complicates consultations since on many occasions, the leaders of the warring factions are busy fighting on the ground, and the representatives need to reach them. Foreign countries seem to be comfort zones, displaying traits of people on holiday, luxury and laxity are part and parcel of their commitments. This makes them easily forget the plight of those they have gone to represent.

The South Sudan peace talks taking place in Addis Ababa, Ethiopia can take place in any other state in the country that is relatively peaceful. Of the 10 states in South Sudan, the conflict is visible in 4 states. Thus the conflict taking place in selected parts of the country offers an opportunity to community leaders in the safe states to mobilise their people to lay down their arms as a call for peace and giving feedback to their warring allies. After all, the people have trust and belief in their community leaders. This way the same objective of negotiating peace could also be reached. Dialogues with the people as opposed to military interventions improve political power negotiations with political commitments.

If round table talks to broker peace were initiated in countries affected by and going through conflict, in this case South Sudan, the ordinary citizens would participate, the negotiators would become messengers of the people, costs of hotels and other facilities would be minimal. There would be immense pressure on warring parties by the citizens to find a solution plus other demands from the people, the brokers and representatives of both parties would be in position to feel what it means to be in the scene of conflict, thereby reaching durable peace agreements and also enforcing them. This would make negotiations achieve more. The venue also prepares a fertile ground for lasting political settlements through holding of dialogues between parties.

Historically, ethnic, religious and women’s groups have been excluded from offering negotiated efforts to conflict resolution despite being experts in mediation among their communities and homes. Furthermore, if peace talks are brokered in places that are thousands of kilometres away, how can we utilize the capabilities of such people?

Citizens can be a driving force to achieve a desired goal if conditions such as proximity to venues of peace talks and an open platform are set to allow citizen participation in whichever form. For instance, during the Liberia peace talks in neighbouring Ghana, women were a driving force through their pressure groups. At one point, those in negotiations demanded the doors of the building where the talks were taking place to be shut. The women then surrounded the building and refused to let the delegates leave until a settlement was made. This placed increased pressure on the negotiating parties to reach a decision. Such groups and many others who have non-violent capabilities should be encouraged to offer their free time and service to end violence against the people and participate in the state building processes.

Addressing the grievances of those who are excluded from the peace process is an incomplete process. People who are affected by conditions that are uncalled for should be allowed to tell their stories and name their perpetrators. Meeting of minds as opposed to meeting of weapons should be a strategy employed to resolve issues. This is the road map to achieve sustainable peace. This can only be viable when devolution of such agendas is brought to the people as soon as they materialize.

The way forward is for “Peace grounds with zero violence” to be established in South Sudan, deliberately used for peaceful negotiations, civic engagement and sanctioned by every leader to respect such grounds that are meant for discussions. They are to be violence free zones that accord the respect of all citizens to the exclusion of no other.

The neutral role of the external mediators during peace talks cannot be understated. In such a case, it takes great courage and sacrifice to volunteer their lives and that of their family to accept to broker peace in situations where negotiations take place in a conflict zone. The government on its part should be able to offer a secure ground to ensure deliberate safety of the external actors.

IGAD, the East African regional bloc spearheading the South Sudan peace talks should consider the said option so as to encourage full participation and monitoring of the implementation of the agreements. This would also minimize costs on their part and keep their presence in South Sudan longer ensuring conscious implementation and hold accountable those who fault their own agreements.

The dangers caused by armed conflicts cannot be endured forever thus an end to violence should be a priority. Conflict causes civilians to become homeless and thus displaced. With no shelters, dry seasons may prove manageable for some, but during the rainy season, with children and mothers forced to live under trees not knowing when their plight will end, a further motivation for peace talks to return home is established. Negotiators should be able to see the plight of those that they are negotiating for. The creation of an opportunity to re-build relations between citizens and their governments can only be achieved by opening spaces that are accessible to the citizens. This helps leaders rebuild confidence amongst the population and attract those in the diaspora to return, and external actors to faithfully contribute to positive state building and peace building. It ensures leaders exchange influence with the citizens. It makes people negotiate what is best for them, as the leaders cannot do it alone. The population also further owns negotiations held at home. Outcomes established in home countries end up building institutions that are internal as opposed to external. Let us give a chance for peace talks to return home.

Josephine is a woman fellow at the African Leadership Centre at Kings College London, UK. She has worked with STEWARD women’s organization and facilitated dialogues between security operatives and media houses, as well as community dialogues for Payam (District) authorities, traditional chiefs, police, religious, youth and women leaders in various parts of South Sudan.