You are here: Home / Archives for hypocrisy 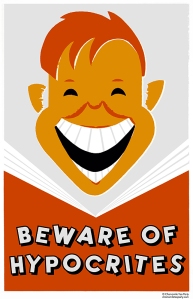 Both the Wikileaks spying scandal and the recent revelations of US phone-tapping of European politicians such as Angela Merkel have significantly damaged American soft power in recent weeks. In a thought-provoking article for Foreign Policy, Henry Farrell and Martha Finnemore contend that the main effect of these revelations has not been to undermine national security, but actually to reduce America’s ability to act hypocritically. The authors claim that hypocrisy is integral to both US policy and its soft power. In an effort to mitigate the controversy of their argument, the researchers claim that US hypocrisy is to some extent accidental, suggesting optimistically that American political elites do not realise how two-faced their country sometimes is. Whilst there may be some truth in this, cynics across the world would disagree. Either way, resentment of perceived American hypocrisy is actually far more widespread problem than even the above authors have realised.

For America’s detractors, a cursory reflection on US foreign policy reveals a litany of hypocrisy. Recent drone strikes in Yemen and Pakistan and the human rights violations of Guantanamo and Abu Ghraib provide ample evidence of unforgivable hypocrisy from a state projecting itself as the land of freedom. American involvement in the supposedly humanitarian campaign to oust the Gaddafi regime in Libya was lambasted as hypocritical since simultaneous government violence against civilians in Bahrain was ignored. Of course not even America can intervene everywhere, and it is not the only hypocritical actor on the world stage (Libya was a NATO operation).  But America champions itself as the paragon of democracy, freedom and liberty.  To espouse such humanitarian virtues and then uphold them selectively is to appear hypocritical.

Such are the constraints of realpolitik. Acting in one’s self-interest is only hypocritical if one pretends that one is not. Bismarck understood this, and there was no pretention in his infamously dismissive statement that the Balkans were not worth the bones of a single Pomeranian grenadier. One might say the same about the American view of Syria today; that over 100,000 Syrian deaths, by bullet, shell or gas, are not worth the life of one American soldier. The difference, though, is that Bismarck did not claim that he was acting as an exemplar of liberty and human rights. There are good reasons not to intervene in Syria now; although it must be remembered that tens of thousands of Syrians died long before Al-Qaeda-linked extremists predominated in opposition forces. Yet, by not intervening, it is hard to imagine how America could ever justify future interventions on humanitarian grounds having stood by and watched so many Syrians die. One is left wondering which has a more radicalising influence: resentment at American hypocrisy in failing to intervene, or anger at collateral damage and civilian casualties when they do act. To some extent American political elites are damned if they do and damned if they don’t.

The situation is the same for America’s global espionage revelations. One can only imagine the furore if the American government had failed to undertake surveillance that could lead to a major terrorist attack. Surely Al-Shabaab’s attack on the Westgate shopping centre in Nairobi spectacularly demonstrates the danger of inadequate surveillance and intelligence? Such threats make extensive surveillance inevitable, but since intelligence practitioners cannot definitively predict who is a certain threat, then it is unavoidable that in casting the intelligence net they will include the innocent. Some will argue against this Orwellian infringement of civil liberties on principle. However, the issue is not engaging in surveillance or espionage per se, it is the fact that the US has engaged in this whilst promoting itself as the epitome of individual freedom. The population of China strains under a far more oppressive espionage regime, as did many states in which the US has intervened in recent years. However, it is the powerful narrative of American moral exceptionalism that invites such vehement opposition when it appears to contradict its principles.

So where next for US foreign and domestic policy? There is no doubt that US soft power has taken a significant hit in recent weeks. As Farrell and Finnemore argue, America would do well to return to realpolitik as a guiding principle, although this might compromise the liberal values that are integral to America’s global status. American strategic communications policy emphasises being ‘first with the truth’. As the US reassesses its position in the world, more openness and honesty about its intentions would certainly help others better understand the land of freedom. Toning down its exceptionalist rhetoric would also reduce the ammunition for those seeking any reason to criticise the world’s most influential state.