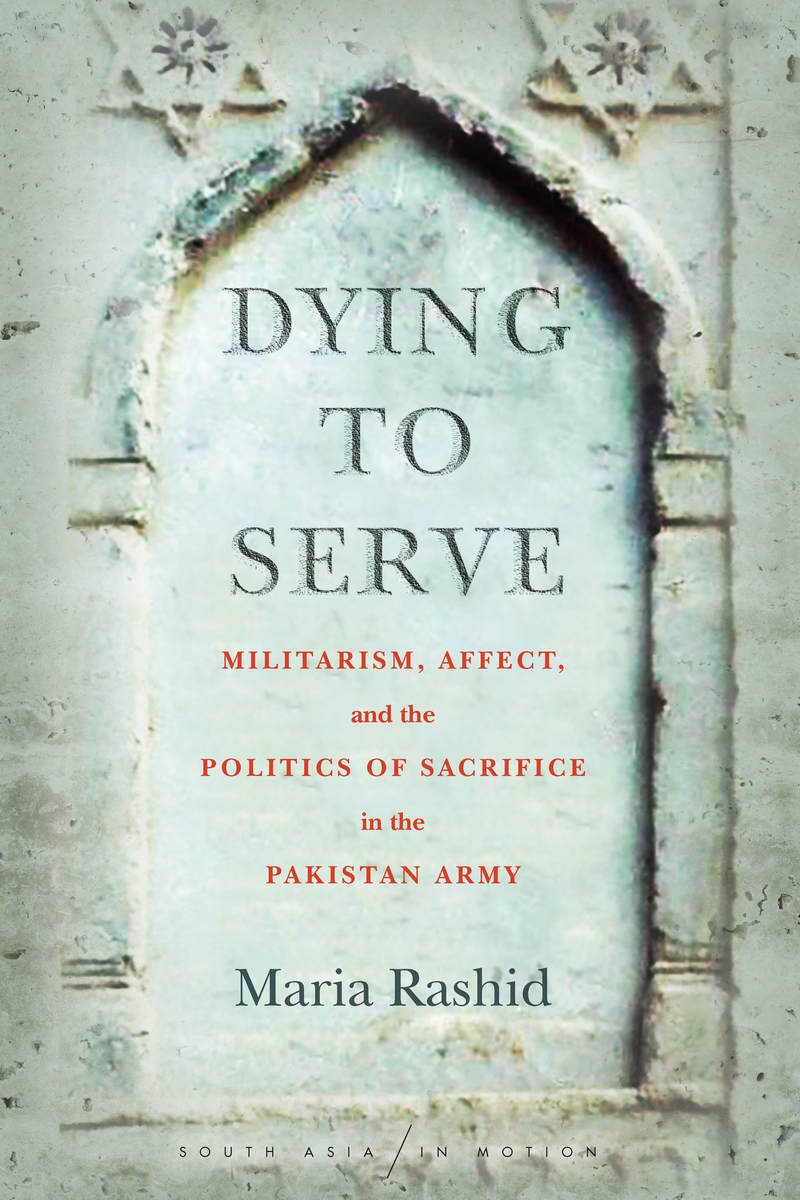 Are military deaths in an armed conflict avoidable and prodigal or are they a necessary and sacred sacrifice required for the protection of the state and society? Maria Rashid’s new noteworthy book, Dying to Serve: Militarism, Affect, and the Politics of Sacrifice in the Pakistan Army, carries this sensitive and difficult debate forward through a study of the Pakistan military’s relationship with its soldiers and citizens. The Pakistan military’s use of religion and the idea of ‘shahadat’ (martyrdom) as a motivator for training, fighting, and dying for the nation are well established (p. 33). This book is a comparative study of narratives provided by the Pakistani state and military on the one hand and the subject soldier and his family on the other.

Pakistan is one of those states that thrive on a strong military spirit. This militarism establishes war as normal and necessary and, in turn, demands sacrifices from its subjects. Dying to Serve is an attempt to understand the mechanisms through which such sacrifices are made sacred by the military narratives of heroism, and meaningful, glorious, and honourable deaths. This mechanism, in turn, extracts legitimacy and unquestioned support from the citizenry. The book explores this phenomenon through the dead soldiers, considered as heroes, mourned for long periods by communities, and taken as social examples. The author also briefly examines the same through retired and disabled soldiers.

In Rashid’s own words, ‘the book examines the role of affect­—such as grief and its accompanying notions of death, dying and sacrifice as well as feelings of attachment, pride, and fear—in maintaining the military’s hegemony in Pakistan’ (p. 9). The study is based on fieldwork conducted in five villages in the Chakwal district of Punjab over a period of thirteen months where the author interviewed more than one hundred people.

The author begins the book by examining the Youm-e-Shuhada (Martyrs’ Memorial) and Youm-e-Difah (Defence Day) ceremonies, described as ‘spectacles of mourning’ (p. 23) that define the narrative and valorise military service. The story proceeds by comparing the narrative of Chakwal as the ‘land of the valiant’, a name the district has earned through its martial tradition since colonial times, versus its location in the Salt Range of Northern Punjab that lends it to an economic dependency on the armed forces for providing the main source of employment. The district is located between the valleys of Indus and Jhelum Rivers and its terrain is partly covered with scrub forest, featuring plains interrupted by dry rock. Approx. 96 per cent of agricultural demand for water is met by rainwater, which naturally leads to ‘gurbat’ (poverty) and ‘bhukh’ (hunger) amongst the inhabitants. It is from this economic deprivation that the author questions the authenticity of the ‘martial tradition’ narrative.

The author begins with the process of military training, where the bonds of kinship are broken to develop affective relationships with fellow soldiers, who signify their new family, and group leaders who stand in for father figures (p. 97). The affection thus sculpted by love and loyalty for the regiment and determination to uphold its honour prepares them to kill or die in combat. It highlights the depersonalisation that soldiers experience along with a sense of emotional distancing, a silencing from others who can no longer understand or relate to what soldiering is about (p. 106). The story also highlights how the military commands the right to ask you to die or kill in its name as a response of love, loyalty, and attachment of familial connections reimagined according to the concerns of the state (p. 207).

Rashid talks of the families of the dead soldiers gripped with grief, guilt, and regret who, yet, have to put on the mask of a social reality scripted with the themes of ‘pride in the act of sacrifice for the motherland and a belief in eternal life’ in order to make sense of the death of their loved ones. They must also accept the money and benefits offered because, after all, it was for material needs that the tribute to the nation was risked in the first place (p. 138). It explores the mechanisms through which a violent and preventable death is transformed into a necessary, honourable, and meaningful sacrifice (p. 149).

One chapter, in particular, brings out the hollowness of this narrative. Describing the disabled soldiers as ‘the bodies left behind’, Rashid argues that although in reality the maiming is socially induced as a result of modern war and armed conflict, it is managed by the military within some perfunctory and feeble attempts at promoting narratives of empowerment, pride in resilience, and sacrifice for the nation (p. 169). The author argues that the military’s ability to depict service and sacrifice as noble and draw foot soldiers from society will be sustained as long as ‘war’ is imagined to be glorious, and the dead to be heroes; whereas in reality, it is merely a viable source of ‘pakki naukri’ (permanent employment) (p. 217).

The author has articulated militarism and its effect accurately in the context of the Pakistan Army. It is a must-read for all, especially those who once believed in the narrative of militarism and the sanctity of military deaths but were confused when the layers of this social construct began to peel off. While Rashid provides a new humbling and soothing perspective on this issue, the one place the book falls short is in providing definitive answers or an equally acceptable alternative belief system.

Despite being a case study on the Pakistan Army, which has played a dominant role in state formation over the years, the arguments made here are applicable to the phenomenon of militarism across the globe. Hardly any society collectively calls its military deaths avoidable or unnecessary.

When viewed through Charles Tilly’s famous cyclic aphorism ‘war made state, and the state made war’ the comparison of narratives highlighted in the book holds firm within the context of ‘state makes war’. However, as this axiom shows that war is inevitable and ultimately perpetuated through the imperfection of human thoughts, whether the same arguments still hold when the ‘war makes state’ and the state merely takes advantages or is victim of its inevitability, remains debatable.

Kamaldeep Singh Sandhu is a PhD Candidate in the Defence Studies Department at King’s College London. His research interests include South Asian security, military culture, and defence diplomacy. An alumnus of National Defence Academy, Pune, Army War College, Mhow and The Royal Military Academy Sandhurst, he has served as an Officer with the Indian army’s Parachute Regiment for ten years and currently serves as an Officer in the Reserve Army, UK. You can find him on Twitter at kamal_sandhu78.

Kamaldeep Singh Sandhu is a PhD Candidate in the Defence Studies Department at King’s College London. His research interests include South Asian security, military culture, and defence diplomacy. An alumnus of National Defence Academy, Pune, Army War College, Mhow and The Royal Military Academy Sandhurst, he has served as an Officer with the Indian army’s Parachute Regiment for ten years and currently serves as an Officer in the Reserve Army, UK. You can find him on Twitter at kamal_sandhu78.