You are here: Home / Blog Article / Diary of a Teacher: Reflections of a South African MP on education during apartheid 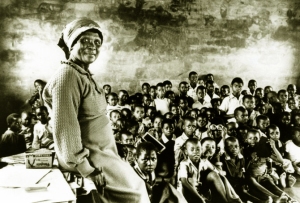 My schooling was under apartheid South Africa (SA) and yes, the system taught us directly and indirectly that we were inferior. Fortunately, at High school we had teachers from the Trotskyite Unity Movement of South Africa (UMSA). They made us interrogate the system in SA.  So even though we were given ‘coloured’ education we rejected that we were inferior. We also knew that for the external examinations we should be careful about what we wrote and avoided any political critique of the country.

Later as a teacher at high school, we were confronted with all the contradictions, discrimination and exploitation of teaching – the syllabuses to teach, the hierarchical nature of the school and the omnipotent reactionary principal in all his patriarchal glory.  White teachers educated at the same institutions earned extra ‘inconvenience’ payment for working at a coloured school.  Male colleagues earned more than us women – and if any of us women dared to marry, we would lose our permanent positions, could re-apply but then had the ambiguous status of being ‘temporary indefinite’.  How did some of us as progressives survive? As some of us taught English, we used literature to explore totalitarian societies, exploitation, sexism and examined the parallels with our context. Newspaper articles were analysed to highlight propaganda and we examined the role of the media in reinforcing the status quo.  We put in extra hours, started film and debating societies and produced plays annually.   Shakespeare and Brecht were vehicles to critique social, economic and political aspects of our society.   We marched with our students against Bantustan education in 1976. In confrontation with black police who beat our students when they had peaceful protests, we challenged them.  Initially we tried to explain and later argued with the police that they were pawns in the regime.

Political unrest again flared up in the 1980s. I joined community structures.  One such was the United Democratic Front (UDF, an umbrella body of more than 100 anti-apartheid structures with all the contradictions- capitalists, communists, Catholics, atheists and Protestants, the Call of Islam, and Jews for Justice. Later the Organisation of Lesbians and Gays, OLGA, also joined. This was an indication of the broadening of our struggle.  In the UDF there was a student of mine from 1976. He was a radical who came for two meetings and left.   But before his departure, he accused me of ‘selling out’ in the 1980s as I had chased them into class when they wanted to boycott. I was puzzled as I also saw myself as progressive, supporting the students’ protests. I could not recall this. Later I then remembered he threw a stone at me when I walked into the classroom. The principal approached us while we were standing outside of the classroom. I then requested students to come into the classroom.  I then walked into the classroom.  Yes, the boundaries were blurred – being a teacher was also being part of the oppressors.

One of the challenges confronting us at a later stage on teaching student teachers was convincing them that getting quality education was also a means of defying oppression.  The student leaders had to be encouraged to not only make mobilizing impassioned speeches at political rallies but should balance attention regarding their academic work well.   Many of these student leaders were too busy ‘organising’ to do their academic work. Or even come to the few classes that materialized.

A state of emergency was declared in mid-1985 giving police and army draconian powers.  The students responded with boycotts and the community with petitions and protests in general. Mass arrests and police brutality with impunity followed.  This exacerbated the general uprising. The students were divided – whether to attend class or whether to continue boycotting and making SA ‘ungovernable’.  There was no teaching for most of 1985. Imagine our surprise when we as lecturers were instructed to set final exams. In the staff meeting I enquired on what we had to set exams as we had done minimal academic teaching. We were instructed to set exams as if there were normal teaching.  We also had to give students handouts on the exam- outlining relevant sections to prepare (and compromise standards, reinforcing the very gutter education the protests were highlighting).

I encountered students on campus crying, appealing to me, and I am sure other lecturers, whether they should write examinations or not. I emphasised that that was a decision that they alone could take. When the examinations came, some students chose to write while the majority boycotted.

Now as a teacher in Central Africa, new and different questions arise.  Currently I find myself in a context of a society emerging from horrendous political conflict.  Subsequently no culture of reading or rigorous academic enquiry exists.   I am teaching economic elites in English.  How does one teach and maintain a standard commensurate with levels at similar institutions elsewhere in the world?  What ‘standards’ do I promote and encourage given the response from students that they, as bureaucrats, have no time to read?  I am seen as having unrealistic demands. The director agrees. Shall I bow to the fallacy that as an African in a poor African country, I must be satisfied with mediocrity?  In SA we had a slogan:  ‘No normal sport in an abnormal society’.  Shall this be a case of no ‘normal’ standards, whatever ‘normal’ may be, in an underdeveloped country?   Another slogan we used was:  ‘La Luta Continua!’  So this is a case of the struggle continues.

Gertrude Fester is a former Member of Parliament in South Africa and Commissioner of the Gender Commission. A feminist political activist, she taught, until recently, Transitional Justice mainstreaming gender, at the Kigali Institute for Education. She is research coordinator of Rwandan Association of University Women and writes fiction and non-fiction, particularly on the lives of women and marginalised people’s.’ She currently lives in Rwanda.