You are here: Home / Blog Article / A lack of cosmopolitan substance: Considerations about the Swiss referendum to impose curbs on immigrants from the EU, a German perspective 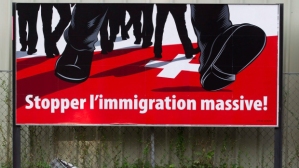 Swiss voters have narrowly (50.3% voted in favour) backed a referendum proposal to bring back strict quotas on immigration from European Union countries in February 2014. Even though Switzerland is not a member of the EU, it has adopted large sections of EU policy. The decision to impose curbs on immigrants from EU countries has not only reignited the debate on freedom of movement in Europe, but also boosted Eurosceptic anti-immigrant movements across the continent. In March 2013, Timothy Garton Ash argued that ‘with the exception of neo-fascist parties such as Golden Dawn in Greece, European rage has not been turned against immigrants, minorities, and imagined fifth columns’ – seven months later he added that ‘2014 is not 1914, but Europe is getting increasingly angry and nationalist’ – with a look at Europe at the beginning of 2014 he proved to be right.

The original version was written in German. You can read it here: https://sarah-kayss.squarespace.com/mangelkk

A lack of cosmopolitan substance

we have it too: only hiding it far better (because of the past)
apart from this, we are all Europeans now (even the children understand this)
because being German, other than being Swiss, comes along with A LOT of rules
they say: a real Swiss is a proud Swiss
we say: a real German is someone who knows what he’s allowed to say and what not
that’s hardly connected to pride though, one knows that pride might easily lead to the gallows
(that’s also because of the past, even the children understand this)

even the Austrians want to be Swiss (at least the majority of the people in Voralberg)
of course. and why? because the Swiss are allowed to say things which are politically incorrect –
(without anyone mentioning the past)?? …NO. Because:
Switzerland is like a referee: you think they are neutral, but one knows neutrality doesn’t exist
like: we won’t join the mission in Iraq, we just donate money for it. of course. Desert Storm.
let’s try to define the word “participation”:

the Americans clear the fields with their bullets
the Brits do what the Americans want them to
Kuwait and Saudi Arabia are also there, somehow
and the Germans finance the whole thing (et al.)
and the Swiss. What are the Swiss up to?

(maybe they observe? reconnoitre? watch? spy?) NO. They only whisper from the sidelines.
and then they kick out all foreigners. All who are not Aryan-Swiss-blooded (perhaps)
the Confederation does not put up with that.

In my canton all people voted with “yes”. We all agreed on this.
And all Swiss abroad have cast absentee ballots. Sure.
…transnational cheers of the right-wing populists. Un pour tous, tous pour un. My arse.
the new motto is not going to be mi casa es tu casa but, there’s the door!
too bad, the surrounding environment isn’t too inviting either –

In Germany too close to Bavaria where they protest against Syrian asylum homes already –
and Austria? Haider is dead, but the Freedom Party of Austria isn’t –
In France they demonstrate against homosexuals, doesn’t sound too open minded –
Liechtenstein is really short of space –
and in Italy the corpses of those who wanted to get in pile up in Lampedusa, also not good –

where to go? …and who came up with the entire idea of open borders in Europe anyhow?
Was it Europe’s Queen Merkel or a majority vote (for a change)? Although.
German citizens are hardly asked for their opinion.
We vote for them. They make the decisions.
Regardless of whether they were on the menu before.
I ordered salmon on brown rice with
elderberry sauce and vanilla ice cream. I got:
fish fingers with brown potato wedges

– the rest is off the menu

Thought experiment:
Germany backs a referendum proposal to bring back strict quotas for immigration
what would happen? Third World War, perhaps. Out of the question.

Something like this only the Swiss can presume to do.
In a week’s time we will stop dealing with it anyhow. Then the Chrysi Avgi is back in the news

There are people who think that Europe has learned from its past.
With certainty.
Yet the question is WHAT?

___________________________
Sarah Katharina Kayß is an internationally published author and recipient of the Austrian-VKSÖ Prize (2012) , winner of the manuscript-award of the Literaturwerk of the county of Rhineland-Palatinate and the German Writers Association (2013) for her poetry and essay collection “Ich mag die Welt so wie sie ist” (I like the world the way it is). She is currently a PhD student in the War Studies Department of King’s College London where she is working on a comparison between British and German officer cadets, researching the relevance and understanding of the national past to their motivation to enlist.