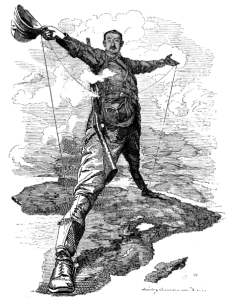 All five of the most failed states in the world lie in Africa, calculates the Fund for Peace in its 2012 Index. Mali, as a case in point, has been failing for months now, the army even went as far as fleeing when the Islamist insurgency attacked them. Only mother France’s troops have turned the tables and are leading the recapture of the country’s North with astonishing swiftness and ease. After all we have done for you Africa, why do you prove us a failure time and time again? At least so the popular narrative reads.

Unlike the recent events in Mali suggest, however, Africa has not disappointed us. We have disappointed Africa. In light of the apparent failure of our imposed mode of order in form of a state system we persist and refuse to change our ways. In fact, most African countries never had a state system, at most borders and institutions left behind by colonialism. Africa’s political order, therefore, has neither failed, nor is it failing. Africa’s political orders are evolving and we might see states emerging from this evolution. But if we opened our minds and our international system, we might just witness new forms of political order different from what we know. While we condemn colonialism for the slavery and abuses it brought about, we still silently praise it for bringing order to a continent of anarchy. State systems with clear boundaries, infrastructure, and powerful governments. However, when independence movements kicked out European imperialists, indigenous rulers seemed incapable of containing their abusive and extractive measures to an economically viable level, as the former colonizers had been able to. The economy and the state quickly collapsed. It seems as though the circle began closing itself, when Mali called upon its old masters to bring about the stability they were unable to provide for themselves.

But does this patronizing viewpoint stand the test of reality?

To begin with, can we speak of states, in the European sense, in Africa? While the 1884 Berlin Conference painted lines on the ‘blank’ African drawing board, which have stayed surprisingly untouched for almost 150 years, is this enough to become a state? Were infrastructure developments, coercive rulers and ideological indoctrination, which came about as by-products of colonialism, enough to fill these borders with a common people? Unlikely. Colonial institutions did not create unifying causes and processes for the emergence of states, instead they were meant to increase the efficiency of exploitation. If any moment in time can be seen as a possible spark for state building during the twentieth century, it was not when Europeans entered the continent. It was rather when Africans in each country collectively decided to kick them out.

Along with the common enemy, disappeared the common cause. Identities and institutions other than the state persisted, such as tribes, kin-groups, clans and kingdoms. But the centralizing apparatus left behind by the imperialists and international incentives to uphold the central state empowered exclusive groups to exploit the rest of the population. Somalia’s dictator Siyyad Barre, propped up first by the Soviets, then by the Americans, went as far as starting massacres against north-eastern tribes simply to boost his grip on power. The same region declared independence in 1991 as Somaliland, and who could blame them after a history of violent discrimination under the pretence of a centralized state? Well, we are blaming them, as no state so far has recognized Somaliland’s independence.

Anglo-European powers did not bring about statehood, but these same powers upheld a ‘quasi-state’ system as a pretext to justify violent repression and avoid the emergence of an organic political order. How, then, can we believe that Western intervention is the key for peace and stability? When recognising a central Somali government for the first time in 20 years the United States took credit for supporting the transition to a central state. What kind of support did the US mean exactly? Propping up Barre’s regime for 12 years? Leading a failed attempt at pacification in 1993, and retreating in haste after the infamous Black Hawk Down incident? Supporting warlords against Islamist groups during the civil war? Encouraging the Ethiopian invasion in 2006 that toppled the only stable Somali regime since 1991 because it was “Islamist”? Or does it indeed refer to the most recent move to acknowledge as the sole representative of Somalia a government that itself effectively controls no more than the capital city?

With the French forces reporting one military success after the next, and newspapers’ daily self-congratulatory headlines on what a great impact we Europeans have on our ailing little brother Africa, as a European I must disagree: Africa has not failed us, we have failed Africa.